Beauty in Nature: Sister Mary of Carmel Lord and Her Art 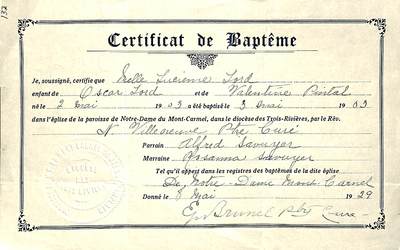 The Dominican Sisters of St. Catherine of Siena of Fall River, Massachusetts ran a number of schools across the Northeast including, Fall River and Acushnet, MA New Haven, CT, and Plattsburgh, NY, as well as catechetical Centers in Chateaugay, Ellenburg, Cohoes and neighboring areas in northern NY, and a convent outside Montreal, Canada called St. Philippe de la Prairie. Early on the Sisters focused on bilingual education, French and English. In their Academy in Fall River, the Sisters hosted an Art Studio for students and adults alike to learn drawing, painting, sculpture, and more. At this studio in Dominican Academy could be found a Sister with a talent for both art and education, Sister Mary of Carmel Lord.

Sister Mary of Carmel was a natural born artist and an excellent educator. She was skilled in drawing, painting, and ceramic making. Her inviting nature and comforting spirit meant she was beloved by her students, personal family, and fellow Sisters. Sister Mary of Carmel had an eye for nature. She saw its inherent beauty and was able to translate it into her art.

This exhibit will discuss the artistic side of the Dominican Sisters of Fall River through the life of Sister Mary of Carmel Lord. It will showcase her natural talents as an artist and educator, the tight-knit community she kept close, and how her art captured the beauty of the natural world. At the end there will be a showcase of most of Sister Mary of Carmel's art currently housed inside the Dominican Sisters of Hope archives in Ossining, New York. 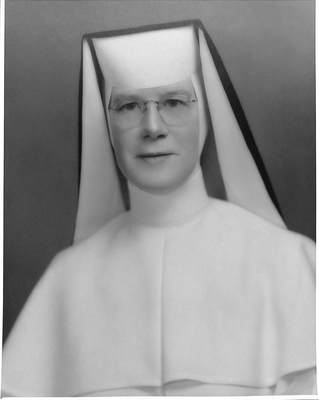 On April 13th, 1913 a young girl was born to Mary Quinn and Thomas Short in the rolling green hills of County Armagh, Ireland. One of ten children, the little girl was named Kathleen Short. She was the representation of Celtic spirituality, and had a fierce love for learning. Kathleen immigrated to the United States in April of 1929 at the age of sixteen. Within two years she would find herself entering the novitate of the Newburgh Dominicans, where she would eventually don the habit and the name Mary Leo Vincent O.P. Kathleen would go on to be one of the most influential leaders of the congregation.

Sister Leo Vincent's love for learning was the underpinning of her whole life, as she would continually work towards expanding her own knowledge and the knowledge of others. She recieved her BA from Seton Hall, her MA from Catholic University and later be awarded an honorary doctorate from Mount Saint Mary College. She used her education to help others, serving as an elementary school teacher for many years in Jersey City, Mount Vernon, and Newburgh, eventually moving on to high school education.

In 1959, Sister Leo Vincent was elected Mother General of the Newburgh Dominicans where she would go on to serve two terms totaling 12 years. During her time as Mother General, Leo Vincent would preside over significant changes in the governance of Catholic religious orders due to the Second Vatican Council. As well, she would use her love of education to press the evolution of the small Catholic college at Mount Saint Mary into a four year school in the Hudson Valley. Sister Leo Vincent's time as Mother would prove a turning point for the Dominican Sisters of Newburgh in almost every aspect of life.

Sister Amata Galligan: A Life Spurred On by Disaster 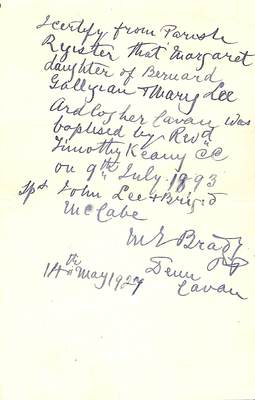 Margaret Galligan, an Irish immigrant living in America, sits eating lunch with her Aunt on a long cruise back to her homeland of Ireland. What should have been a joyous trip is abruptly interrupted by two large explosions from a torpedo hitting the passenger liner she is aboard, the RMS Lusitania. Left adrift with her Aunt and clinging to debris from the wreckage, she promises to devote her life to serving others should she survive her current peril.

After her rescue and eventual return to America, she had a chance meeting with a member of the Dominican Sisters of the Sick Poor. She instantly knew that God had answered her prayers, and was reborn as Sister Mary Amata. She would go on to spend the rest of her life helping the sick, both young and old, in Ohio, Colorado, and New York. She was loved by many, and her devotion and resolve to help others was forged that fateful night in the Atlantic.

This special feature will showcase Sister Mary Amata Galligan through the records contained in the Dominican Sisters of Hope Archives. We have items including photographs, news articles, and letters regarding Sister Mary Amata.

The Year in Review Digital Exhibit details the pandemic, as it relates to the Hope community and the world at large. The exhbit contain born digtal material as well as recorded personal experiences from sisters and staff of the Dominican Sisters of Hope

In 1995 the Dominican sisters from the Newburgh, Ossining, and Fall River congregations voluntarily dissolved and joined together to found the new Congregation of the Dominican Sisters of Hope. This exhibit reflects back on the last 25 years of what inspired these sisters to live a life of hope everday.

The exhibit included the various leadership teams throughout the years, Chapter meetings (a 5 year gathering of all the sisters), the sisters' corporate stances, minitries they have been involved in and the development of the Mariandale center over the years.